After the fourth-quarter meltdown, where U.S. stocks dropped nearly 20%, the U.S. stock market returned to its low volatility ways in the first quarter of 2019.

By early May, the market had gone 87 trading days without a 3% correction, the second-longest streak since the March 2009 market low.

However, by mid-May, global trade war concerns spooked investors, sending the S&P 500 down 4.5% to 2811.87. Sectors and companies with exposure to China were hit the worst, some down double digits. 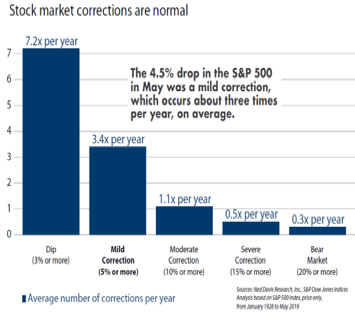 According to Ned Davis Research, it would likely require more problems beyond the trade war for the latest pullback to worsen into a double-digit correction.

They’re watching the Fed, earnings, and the percentage of stocks above their 200-day moving averages for signs that the pullback is spreading beyond multinationals that are exposed to China trade.

Stock market corrections really aren’t an issue if you remain focused on the long term. For the long-term investor, a stock market correction is often a great time to pick up new investments at attractive valuations. Additionally, it could provide an opportunity to buy or add to existing positions. It’s also a good time to review asset allocations.

If the trade war pushes the U.S. economy into a recession, the stock market correction could get worse, potentially to “bear market” levels.

With some resolution on the U.S.-China trade discussions, investors could get refocused on a growing U.S. economy and the stock market could