Stocks Hit New Highs by the End of Q2

After Trade War Concerns, Stocks Hit New Highs by the End of Q2

With stocks and bonds both rallying, a typical U.S. 60/40 portfolio (S&P 500 Total Return/Barclays U.S. Aggregate Bond Total Return) put in a positive performance for the quarter at 3.95% (chart below), but was below its long-term historical gain per annum of 7.77%. 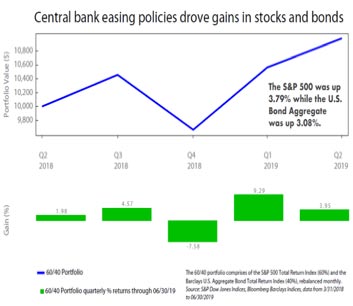 Stocks see-sawed through the quarter, first rallying in April to new highs, then dropping 6.4% in May due to heightened trade war tensions. With prospects of a trade agreement and Fed cuts on the horizon (possibly as early as July), the S&P 500 rallied to a new high of 2,954.18 late in the second quarter.

Growth stocks were top performers, with the NASDAQ posting a 3.58% gain in the quarter and Growth beating Value in every market cap tier. International stocks gained in Q2, but trailed the U.S.

Commodities were mixed. The widely followed S&P Goldman Sachs Commodity Index fell 2.0%. Crude oil’s drop of 3.4% dragged the index lower. Gold posted solid gains of 9.07% in the quarter, breaking out to a six-year high of $1,415 per ounce.

Q2 was a roller coaster, but stocks hit new highs

The magnitude of the index’s gains may be unusual, but the pattern is in line with history.

Based on the Ned Davis Research S&P 500 Cycle Composite for 2019, which is a combination of the historical one-, four-, and 10-year cycles (chart below), the S&P 500 has followed its historical trend relatively closely. 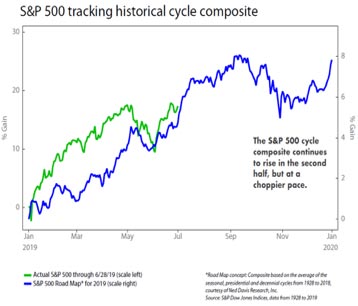 Note that the cycle composite for 2019 continues to rise in the second half, but at a choppier pace, providing an outlook of returns in-line with the long-term average of 5-7%.

For the first half of 2019, Growth’s dominance was even more pronounced, with each Growth index outperforming its Value counterpart by at least 4.7%. Mid-Cap Growth’s 26.1% year-to-date gain was nearly double the gain of Small-Cap Value.

Ten out of 11 sectors posted double-digit gains in the first half.

Financials was the top sector in Q2, with gains of 7.43%. The sector’s positive sensitivity to a steepening yield curve, which tends to happen around the first rate cut, likely aided its rebound.

Technology was the top contributor in Q2, thanks to the third-best returns (5.65%) and biggest weight (21.2%) in the S&P 500 Index. The sector struggled in April and May amid trade war concerns, but rebounded in June.

Energy was the only sector to post losses in Q2 (-3.72%), as falling crude oil prices weighed on the sector.

Despite the multi-year low in Treasury yields, bond proxy sectors (such as Real Estate, Utilities and Consumer Staples which pay high dividends), underperformed in Q2.

According to Ned Davis Research,

when stock and bond returns are both up 10% or more over a six month-period, stocks tend to perform better than bonds over the following 12 months.

The biggest uncertainty facing the stock market currently is the trade wars’ impact on economic growth. With market sentiment back to extreme optimism, the stock market is vulnerable to a correction. Trade agreement details will be key.

What a difference six months make. Late last year, financial markets were worrying the Federal Reserve (“the Fed”) was tightening into a global and U.S. economic slowdown.

As the calendar turns to July, central banks are in the midst of the most dovish rotation in years. The Fed is preparing the markets for a rate cut at its July 30-31 meeting. Globally, 58% of central banks’ latest rate change have been a decrease.

The prospects for lower short-term rates and slower growth pushed the 10-year Treasury yield to 2%, a 33-month low.

Given the drop in yields, it was not surprising that the longest duration bonds had the best performance. With a modified adjusted duration of 18 years, Long-Term Treasury Bond prices gained 5.13% (chart below). 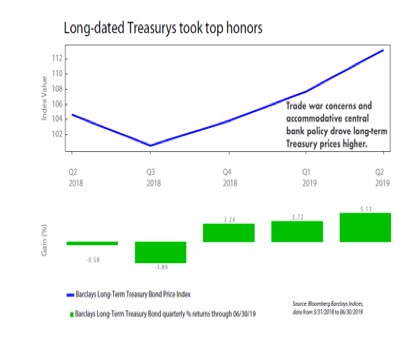 Year-to-date, U.S. investment grade and high yield have had nearly identical returns of just under 10%.

The June Fed meeting showcased a bimodal Fed, which opened the door to rate cuts. Investors are now widely expecting a rate cut at the next Fed meeting, which is slated for the end of July.

The global economy remains in a sustained slowdown.

The intensification of the trade war to already fragile conditions was evident in the June economic data.

The good news is, the U.S. doesn’t appear to be any­where close to a recession. While growth is expected to slow down to about 2.3%, it is merely returning to trend, following an outsized boost from the 2017 tax cuts.

Additionally, inflation remains at record low levels, which is good for stock and bond performance.

InvestmentsStocks Hit New Highs by the End of Q2