Why Investors Should Pay Attention to Millennials

At 90 million strong, millennials are now the largest generation in the U.S. 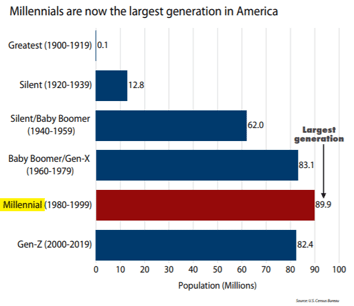 The millennials are moving into the next stage of their spending life cycle, known as the Young Family stage, which is the 35-44 age group. This age group is expected to swell by over six million over the next 10 years, thanks to millennials. Income and spending are expected to increase 25% relative to the 25-34 age group.

According to the Bureau of Labor Statistics’ Consumer Expenditure Surveys, household spending rises until it peaks in the 45-49 age group. Having faster population growth in higher-wage earning groups relative to lower-wage earning groups creates a favorable demographic mix, which could drive higher economic growth and higher stock prices.

There’s been a lot of debate around millennials’ spending patterns, and if they are really different than other generations. They definitely have a couple of unique characteristics.

However, in general, as recently confirmed in a Ned Davis Research report titled “Millennials with Money,” spending patterns by millennials are surprisingly similar to past generations. They are moving out of their parents’ homes and forming households. Their incomes are rising with age. They are still increasing spending on major categories like housing and autos (albeit perhaps slightly delayed by a year or two), just like multiple generations before them.

Winners will be in the right category or format. Categories with stepped up spending include beauty and personal care, footwear, pets, children’s clothes, fitness, and recreation (chart below). In terms of format, discount retailers that target families, offer competitive prices, and can adjust quickly to changing preferences have an advantage. 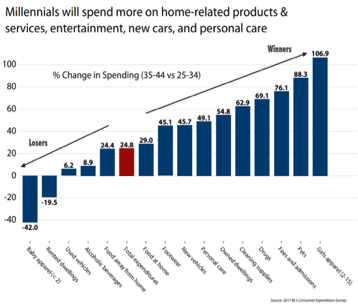 Losers will be in the wrong categories or face unfavorable age-related trends. Relatively weak spending in categories like alcoholic beverages will hurt beer companies. Millennials are currently the core arts-and-crafts customer, potentially hurting this segment as they age out of the category. The typical buyer of new construction is late 40s and more affluent, leaving most of the homebuilding industry exposed. Meanwhile, adult apparel looks vulnerable, especially if it is tied to athletic activities from which millennials are moving away. This presents a challenge for department stores and sports-based apparel names.

There will be winners and losers within favorable and unfavorable categories. In many industries, there are important differences among companies too. Athletic apparel and footwear companies that focus on fitness and the outdoors are positively positioned for demographic changes, while those that skew young and focus on performance, are likely to face challenges (in the U.S.). While homebuilders may be disadvantaged overall, those that focus on entry-level and lower price points will fare better than those that focus on the luxury segment of the housing market.

Rising millennial spending should be a demographic positive until the peak of the generation born in 1991 reaches their peak spending age, sometime in the early 2040s.

However, all of the millennial excitement has to be tempered by acknowledging the elephant in the room: baby boomer spending is declining. To make matters worse, Generation X is too small to pick up the slack.

A favorable demographic inflection point, where millennial spending will offset declining baby boomer spending, could still be 10 years away.

In the meantime, investors will have to navigate the demographic cross-currents to find industries and companies with demographic tailwinds. Millennial-focused ETF funds could offer diversification.