An average U.S. portfolio recouped the losses from Q4

The first quarter was a mirror image of 2018. Stocks went back to beating bonds and six out of eight major asset classes posted gains of at least 5%.

A typical U.S. 60/40 portfolio (S&P 500 Total Return/Barclays U.S. Aggregate Bond Total Return) put in a strong performance for the quarter at 9.29% (chart right), above its long-term historical gain per annum of 7.77%, and recouped the losses from Q4 and more. 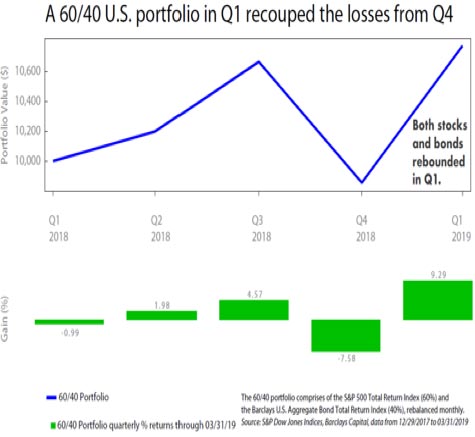 The cause of the market’s reversal is open to de­bate. Was it central banks, led by Fed Chair Powell, pivoting from tightening to easing modes? Was is the prospect for a trade war solution? Or was it the realization that the market had priced in the worst-case sce­nario on Christmas Eve? The answer is likely “all of the above.”

More importantly, as the market moves into the second quarter, signs of deterioration in any of the above could be the catalyst for a pause before a run at the old highs.

Stocks beat bonds, with the S&P 500 Index up 13.07%, over 9% more than the Barclays Long-Term U.S. Trea­sury Bond Index. Globally, it was the same, as the All-Country World Index beat out global bonds.

The Nasdaq Composite was a top performer, posting a 16.5% gain in the quarter. International stocks gained, but trailed the U.S. China was a standout within Emerging Markets, gaining 17.84% in local currency terms, recovering much of 2018’s 20.3% loss.

Q1 rallied, but hasn’t yet erased the losses in Q4

The stock market hit some milestones in Q1. March 9th was the 10-year anniversary of the secular low (the beginning of a new long-term secular bull market). 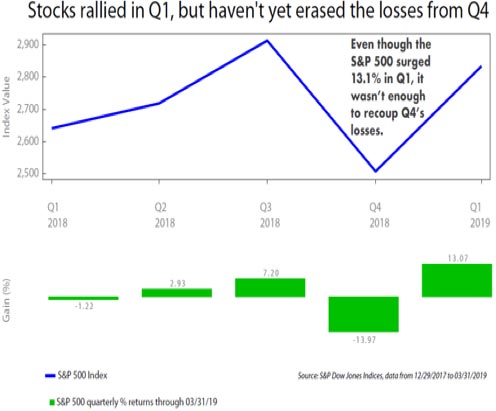 The market rally has had some clear positives. Investor sentiment was negative at the end of December and moods have improved, the technicals of the market are good, and central banks around the world have become more investor-friendly.

The pertinent question is, what does it mean for the market moving forward? According to Ned Davis Research, the historical mes­sage from a strong start is usually good news for the rest of the year. In fact, since 1926, when the S&P 500 has gained at least 10% in Q1, it has risen the last nine months of the year 85% of the time by a median of 7.0%.

However, with the global economy still weak, geopolitical risks not cleared up yet, and investor sentiment back to extreme optimism, the market is vulnerable to another correction. Perhaps the next one won’t be as severe as the last.

Growth outperformed Value at all three market-cap tiers. Small-caps outperformed large-caps, with the Russell 2000 returning 14.58% versus 13.05% for the Russell Top 200. However, the point-to-point analysis masks a rotation back to large-caps in late Q1. Mid-cap Growth was the top performer of the nine style boxes, gaining 19.62%.

Four other cyclical sectors (ones that are tied to economic growth)— Industrials, Real Estate, Energy, and Consumer Discretionary—gained between 15 and 17%, which was primarily a reversal of Q4’s losses. The prospects of a trade war resolution helped several Industrials industries gain 20% or more.

Financials and Health Care were the worst-performing sectors, but still had positive returns.

The Fed’s policy re­versal means that the yield curve could remain flatter for lon­ger, a negative for bank profitability.

Health Care was the top sector in 2018 so its relative weakness could be a reversal. Investors may be concerned with government regulations that are popular talking points as the 2020 U.S. presidential primary season approaches.

Bonds fell earlier in the quarter but rallied in March

The big surprise in Q1 was a pivot in Fed policy, in which it indicated a pause in rate hikes. As a result, all major bond indexes posted gains in Q1. 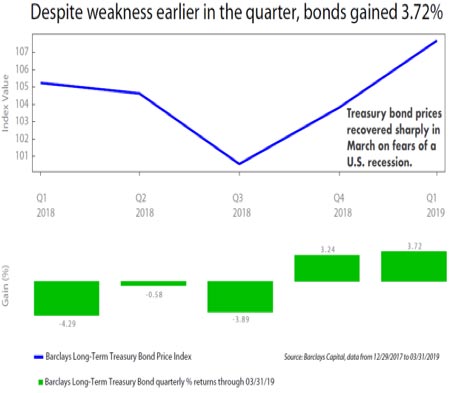 U.S. high yield led the way returning 7.26%, more than recovering from Q4’s 4.5% loss. It was the biggest quarterly gain since Q3 2009. Dollar-denominated Emerging Market bonds were the next best performer, gaining nearly 5.43%.

After having the dubious distinction of being the worst-performing U.S. sector of 2018, the longer duration investment grade corporate bond index came in third place with a return of 5.14%.

Long-Term Treasuries were weak earlier in the quarter, but recession fears resulted in a surge in prices in March, and pushed the index up 3.72% for the quarter (chart right).

While the Barclays U.S. Aggregate gained 3.0% in Q1, the Global Aggregate returned 2.32%, as non-dollar denominated assets were hurt by a stronger U.S. dollar.

In late March, investors became concerned about an inverted yield curve (when longer duration Treasuries yield less than shorter duration ones). According to Ned Davis Research, investors need not worry just yet.

The yield curve is inconsistent. The benchmark 10-2, for example, has not yet inverted. And the curve steepens sharply after five years.

The market is way out in front of the Fed, fully pricing in a rate cut within a year. However, the market is not always right. Market and Fed expectations need to converge at some point. In 2017, the market moved toward the Fed, while the Fed is moving toward the market so far this year.

Investors shouldn’t get complacent about the tightening cycle being over. Market-based inflation expectations have moved modestly higher this year. And core inflation (the change in prices except food and energy) could remain sticky due to strong housing demand.

The market could be surprised if the Fed resumes rate hikes later this year, which could be bad news for Treasury bond prices and good news for short-duration securities.