How the U.S. Government Shutdown Could Impact You

We’ve just experienced the longest partial government shutdown in U.S. history (35 days). And we’re at risk of having another shutdown in mid-February. 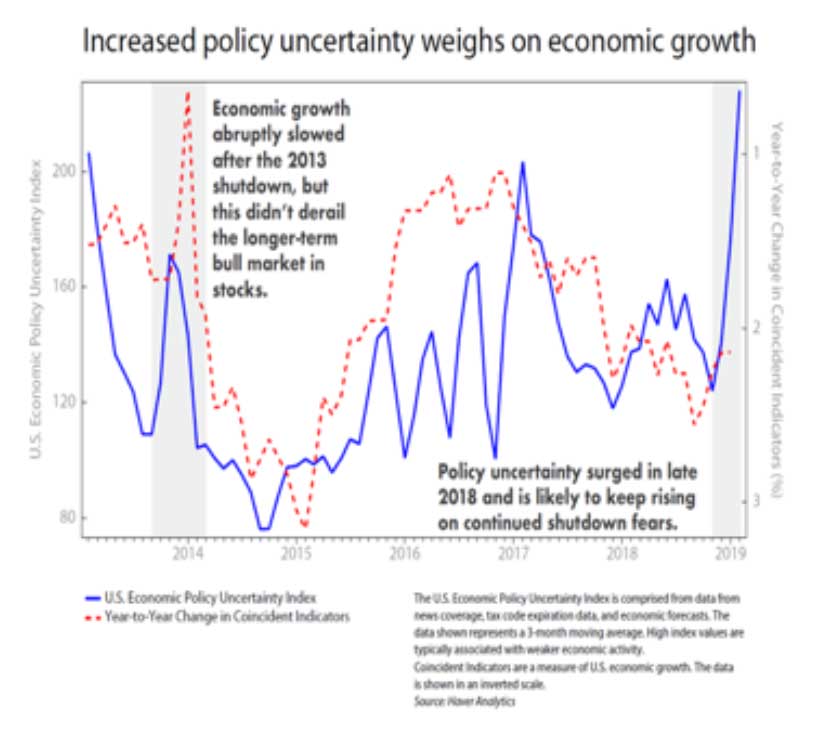 Three ways this could impact you and your portfolio:

Past shutdowns have slowed economic growth in the months that have followed. Economic slowing after shutdowns is typically short-lived, but may linger longer this time.

Estimates vary between 0.1% and 0.2% subtraction from real GDP growth for every two weeks that the government was partially closed.

According to the Bureau of Economic Analysis, the 2013 shutdown, which lasted for 16 days, subtracted 0.3% from real GDP growth in Q4 of that year.

Trump’s own economic policy advisors think the impact could be worse – a reduction of 0.13% each week the shutdown continued.

Stock market performance is driven by expected economic growth and earnings expectations. So weaker-than-expected growth could cause short-term weakness in stocks, but it shouldn’t derail the longer-term bull market.

The dysfunction in Washington has resulted in a spike in the Economic Policy Uncertainty Index, a measure of sentiment, as shown above.

Policy uncertainty has historically been detrimental to business spending and weighs on overall economic growth.

Investors don’t like uncertainty — so expect more wild swings in the financial markets until the cloud of uncertainty is permanently lifted.